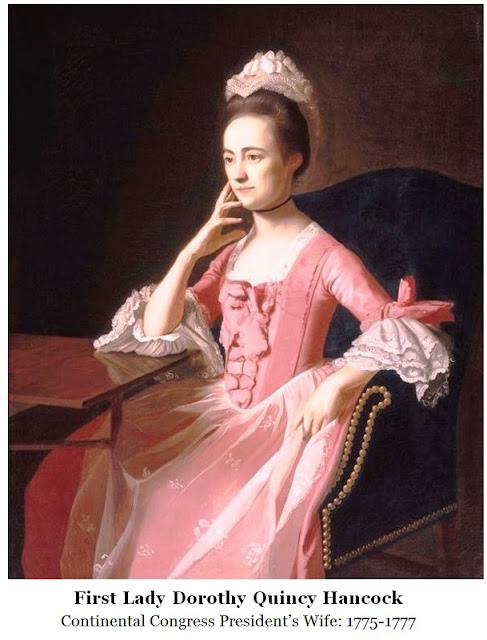 “The public mind seems not to be yet settled on the Vice President. The question has been supposed to lie between Hancock & Adams. The former is far the more popular man in N. England, but he has declared to his lady, it is said, that she had once been the first in America, & he wd. never make her the second.” -- James Madison, October 28, 1788

This excerpt from James Madison’s letter to Edmund Randolph is surprising for two reasons. First, the use of the term “First Lady” to describe the president’s wife is generally thought to have begun some time in the 19th century. While Martha Washington was frequently referred to as “Lady Washington” in her lifetime, a Mrs. Sigourney is credited with using the phrase for the very first time in a profile of Martha published in the Boston Currier on June 12, 1843. Subsequently, President Zachary Taylor is said to have referred to Dolley Madison as “First Lady” in his 1849 eulogy at her state funeral, but there is no extant text of his remarks. The expression began to be somewhat popular a decade later, when Harriet Lane, niece of bachelor President Buchanan, was referred to in an 1860 article as “First Lady of the Land.”

Madison’s comment is remarkable, however, not just for its seemingly anachronistic terminology, but also because of its subject. Martha Washington is, after all, universally recognized as the United States’ first First Lady – whether or not that term was in use at the time. To whom is Madison referring?

Throughout American history, the First Lady has played an important role in hospitality. She serves and has served as hostess, adviser and, often, social activist – even before the Constitution of 1787. In 1776, George Washington served as the Commander-in-Chief of the Continental Army but he was not the President of the United States; John Hancock was the elected President of the Continental Congress and in that position he signed the Declaration of Independence. As President, Mr. Hancock was considered the new nation’s Head of State. The Commander-in-Chief’s wife, Martha Washington, and the Continental Congress President’s wife, Dorothy Hancock, each took on the responsibilities of providing hospitality to important figures of the day. 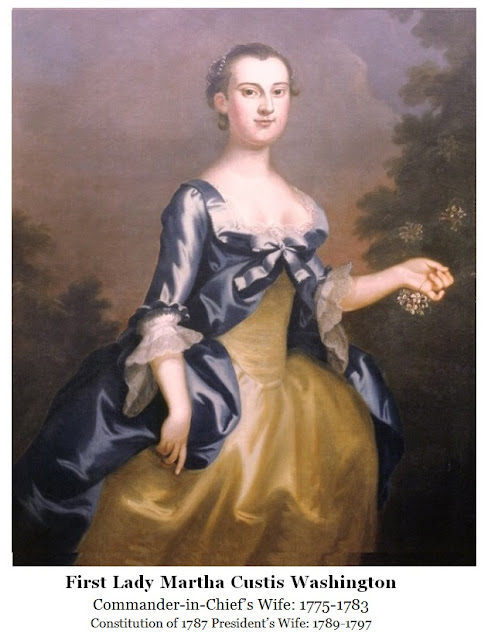 In addition to hospitality, the First Ladies supported their husbands by helping them carry out many tasks. For example, Martha Washington was very concerned with the morale of the troops, and worked with women in many cities to collect funds and make shirts for soldiers. She stayed with her husband in camp, cared for sick soldiers and helped organize dances and dinner parties, frequently at the commander-in-chief’s headquarters.

In Philadelphia, “Dolly” Hancock helped her husband not only by hosting dinners for congressmen and foreign visitors, but with basic tasks like trimming the rough edges off the paper money printed by Congress, and packing it into saddle bags to be carried to different parts of the country. John Adams describes Dorothy in a letter sent home to his wife, Abigail, on November 4, 1775:

Two Pair of Colours belonging to the Seventh Regiment, were brought here last night from Chambly, and hung up in Mrs. Hancocks Chamber with great Splendor and Elegance. That Lady sends her Compliments and good Wishes. Among an hundred Men, almost at this House she lives and behaves with Modesty, Decency, Dignity and Discretion I assure you. Her Behaviour is easy and genteel. She avoids talking upon Politicks. In large and mixed Companies she is totally silent, as a Lady ought to be—but whether her Eyes are so penetrating and her Attention so quick, to the Words, Looks, Gestures, sentiments &c. of the Company, as yours would be, saucy as you are this Way, I wont say.

Students and Teachers of US History this is a video of Stanley and Christopher Klos presenting America's Four United Republics Curriculum at the University of Pennsylvania's Wharton School. The December 2015 video was an impromptu capture by a member of the audience of Penn students, professors and guests that numbered about 200. - Click Here for more information


Martha Washington remained wife of the commander-in-chief until her husband resigned his commission on December 23, 1783, following the signing of the Treaty of Paris in September. (She of course resumed that role, as well as serving as the wife of the nation’s chief executive, upon Washington’s inauguration in 1789 as President and Commander in Chief.)

But the President of the Continental Congress served a year or less. And this tradition became codified under the Articles of Confederation, which not only further limited the president’s congressional powers, it specified a one-year term, with no possibility of re-election. 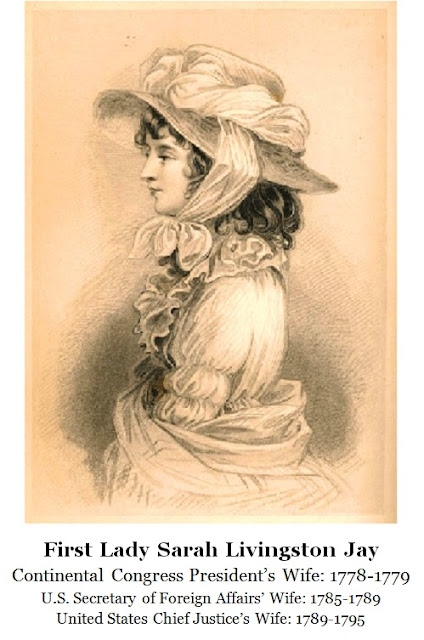 Although the role of the President of both the Continental Congress (1774-1781) and the United States in Congress Assembled (1781-1788) was vastly different than the role under our current constitution, hospitality was an expected part of the job. Indeed, beginning under the Presidency of John Jay (1778-79), the president received the use of a “convenient dwelling house,” along with “a table, carriage and servants” at public expense, and a $3000 entertainment stipend. Sarah Livingston Jay was not able to join her husband until several months into his presidency, but, upon her arrival in Philadelphia, she both hosted and attended dinners that included such dignitaries as the Ministers of France and Spain. The development of those relationships played an important role in both the selection of John to serve as Minister Plenipotentiary to negotiate Peace with Spain, and Sarah’s decision to leave their son, Peter, with their parents and join her husband for several years of diplomacy in Europe.

Martha Huntington, wife of the Continental Congress and USCA President Samuel Huntington, did not originally travel to Philadelphia upon his assuming the presidency on September 29, 1779, but she joined him when his term was extended into a second year.  In 1780, after Congress provided him with a proper house and servants, a post rider was sent with a carriage to Norwich, from which she was escorted, according to the newspaper, “by a number of gentlemen and ladies of the first character.”  Like Dolly Hancock before her, First Lady Martha Huntington was a generous and quiet hostess who, according to the Marquis de Chastellux, “served everybody, but spoke to no one.”

Even before the modern presidency, the First Lady was not always the president’s wife. When Congress was forced to flee from Philadelphia to Princeton, New Jersey, in 1783, Elias Boudinot (the fourth president under the Articles of Confederation) moved to the home of his sister, Annis Boudinot Stockton. A published poet, Annis welcomed congressmen and dignitaries, advocating on behalf of the new republic. Her poem, “On hearing of the news of the capture of Lord Cornwallis and the British army, by Gen. Washington,” was published in the New-Jersey Gazette (under the by-line, “by a lady of new-Jersey):

Bring now ye Muses from th' Aonian grove,
The wreath of victory which the sisters wove,
Wove and laid up in Mars' most awful fane,
To crown our Hero on Virginia's plain.
See! from Castalia's sacred fount they haste,
And now, already, on his brow 'tis plac'd;
The trump of fame proclaims aloud the joy,
AND WASHINGTON IS CROWN'D, re-echo's to the sky. (ll. 1-8)


Although The Articles of Confederation would be completely replaced by the Constitution upon its ratification at the beginning of 1789, the dinners hosted by President Cyrus Griffin and his wife, Lady Christina, were designed to bring together political opponents in a social setting, to work together on important Congressional issues of the day. Cyrus had met Christina, daughter of the Scottish Earl of Traquair, when he was studying law in Edinburgh; despite religious differences, the two married. Abigail and John Adams’ daughter, Abigail Adams Smith, provided her mother this brief overview of the social week circle during the last months of the United States in Congress Assembled:


The President [Cyrus Griffin] is said to be a worthy man; his lady is a Scotch woman, with the title of Lady Christina Griffin; she is out of health, but appears to be a friendly disposed woman; we are engaged to dine there next Tuesday…

The President of Congress gives a dinner one or two or more days every week, to twenty person, gentlemen and ladies. Mr. Jay, I believe, gives a dinner almost ever week: besides the corps diplomatique on Tuesday evenings, Miss Van Berkell and Lady Temple see company; on Thursdays, Mrs. Jay and Mrs. Laforey, the wife of the French Consul, on Fridays; Lady Christiana, the Presidentess; and on Saturdays, Mrs. Secretary ---. Papa knows her, and to be sure, she is a curiosity. (September 7, 1788).

*The Articles of Confederation limited the term of each USCA President to one year. Consequently, each President remained in office until the one year term expiration, unless the USCA President resigned or another Delegate was elected in his place.

Capitals of the United Colonies and States of America